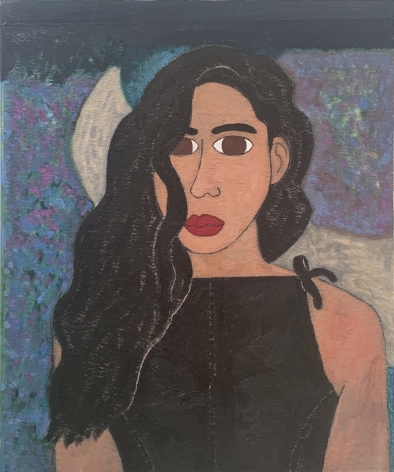 Naj Amani (b. 1992) is an American figurative painter, a storyteller extraordinaire, whose intimate portraits of women-- fictional and nonfictional-- respond innocently to the euphoric stimuli with which they were created. Amani’s artistic process allows his vulnerability to take control of the brush, and with Chris-Krausian postmodern bravery, paints the portraits of past lovers, close friends and unattainable figures. The complexity of these relationships spark the curiosity we feel when we look at his paintings: who is this woman, and why did he paint her? His upbringing in the “Forgotten Borough” of Staten Island informs his practice in opposites, because the concrete that he saw looks like gardens on the canvas, grand pastures and tropical flowers. Even with such contemporary concepts his style remains rooted in classic oil techniques, building on those of modern masters like Lucian Freud, Francis Bacon and Pablo Picasso. Every portrait tells an emotional narrative where no climax is visible, and only a delicate courtship between powerful female characters and their relationship to the painter comes to life under the gaze of deep, pupil-less eyes.