Paolo Pelosini’s Nocturnes builds his vision of Eden at night, where destructive elements flourish through the thick black tar, ghastly creatures party in the absence of humans, and metal angels guard the canvases. While Pelosini’s style is informed by his classical training at the Instituto d’Arte, it is his affinity for the gruesome, the dark and malevolent, that flash into the viewer visions of a monstrous, polluted world, while the artwork itself maintains its beauty.

The paintings are large scale portals into landscapes that spread somewhere between the wild and the city, which emphasize big, turbulent clouds, and the eerie moon. On first glance the viewer may think these places are impossible, but soon one notices how common some of these animals can be, how often we encounter tar in the city, and how often natural disasters loom over our post-industrial world.

The sculptures are made out of the decadence found in the streets of Manhattan: sheet metal, file cabinets, drums; objects that retain the signs of their use and human contamination (what Pelosini calls “the local stone”). Mostly, the materials are cut with an axe. The sharp, tense and tormented edges could only be obtained with a tool of immense physicality. Sculpture itself is the subject of his work: a Venus in a classical pose, a figure inspired by west African practices or an animal with a Folk Art that cohabit the same space.

“My recent work is the end result of a long journey beginning over fifty years ago. I was born in Tuscany on the hills near Lucca facing the Mediterranean Sea, the house where I grew up had no books, and with the exception of the frescos in the local Romanesque church, I had never seen any art. At the age of ten I was given a small encyclopedia with a few color reproductions of paintings, for the first time I saw Leonardo Monet and Picasso. I was so fascinated by those images that I knew then that I was going to be an artist. At the age of fourteen I was given colors and brushes and painting became my obsession. At sixteen I enrolled at the Instituto d’Arte in Lucca, at that time the school had still a classical curriculum, we drew from the model and copies of Greek sculptures, we had to learn:  Fresco, Egg Tempera Perspective etc, but what interested me most was contemporary art. I was influenced by Morandi, Bacon and then Warhol. In 1964 I entered the Accademia d’Arte in Florence but America was where I wanted to be. In 1967 I landed in JFK with $50 in my pocket. I had a friend that was a student at Oberlin College and I was able to study there for six months as a Special Student. Minimalism was at the time the new hot trend and I became a Minimalist. After finishing at Oberlin I was given a scholarship for the MFA program at the University of Minnesota and I moved to Minneapolis. During a visit to New York in 1969 I discovered conceptual art and I became a conceptual artist. In 1970 I exhibited conceptual work at the Walker Art Center. After teaching for a few years at the Cleveland Institute of Art I finally moved to New York.

The challenge is for me to be able to make intelligent and original work for everybody. My studio is now in Spanish Harlem, it is a storefront with two large windows where I show my work, it is an ideal situation to test this new direction. The last several years have been the most productive and I believe that the best pieces I have created to date is in this body of work - “Nocturnes”. 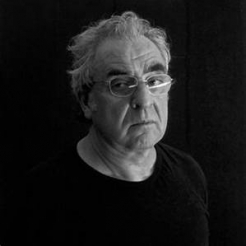