“We are so pleased to have the privilege to work with extraordinarily talented artist, Tim Bengel,” said Philippe Hoerle-Guggenheim, Founder & Owner of HG Contemporary Gallery. “We seek out the best and most promising artists in the world, so the comparisons to Banksy, Basquiat and Keith Haring are quite remarkable and well deserved.”

During an exclusive opening on Thursday September 7th, Tim will reveal a never before scene piece from horizontal to vertical - a process he has made famous through his online videos. Inspired from a young age on trips to the Staatsgalerie Stuttgart near his home of Ostfildern, Germany, Tim started imitating drawings of artists like Cy Twombly and Kandinsky. He was confused what simple dashes of color could mean and started realizing the importance of defining his own style. Earning his first art award at 18 for a collage made of coins depicting his perception of the European financial crisis, Tim then became determined to define a technique with “great recognition value.” He developed his method of using sand, gold and glue between 2014 and 2015 and still challenges himself to push to incorporate new and different art methods and experimental mediums.

With over a quarter million social media followers, Tim now chooses his themes carefully, wanting each “to be a challenge,” and “not to be subordinated to anyone or any ideology.” In Tim Bengel’s Monuments exhibition, his intent is to bring life into something that is lifeless and to display it in a thrilling way. 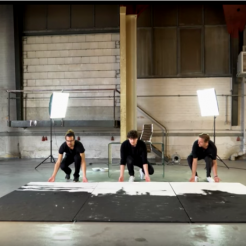