Where Are We Going? / ¿Para Dondé Vamos?

Williams Carmona was born in La Habana, Cuba in 1967 and studied at the Universidad de Bellas Artes in La Habana, Cuba. Like many of his contemporary colleagues, he decided to leave Cuba in the 1990s because of the strict restriction he felt on his artistic freedoms, especially concerning his social, cultural, and economic world views.

His search for his own artistic values in the midst of the constricting attitude of the country was the turning point that caused him to search for greater perspective and the freedom to express himself as he desired.

Carmona states of his work, “A very frequent theme in my work is the now-commonplace Cuban diaspora, which I portray with a full sense of patriotic responsibility. The “balseros” (drifters at sea), the displaced, the immigrants, whatever their motivation, the ones who return because they have no choice, and other related themes that I have made my own, are all predominant in my artistic vision. The ones who are to blame
for everything that’s going on in the world right now are more like tragic clowns or caricatures of times bygone, the interpersonal relations and the morality of earlier epochs are dwindling, as is our preoccupation with our fellow men. As a conscious creator, I see no borders in the psychological or moral hierarchies as they stand in today’s world. A rumba, or a guaguanco, an Adam, or an Eve, it’s all the same. It no longer matters what you represent to others, you can shape yourself to be who you want or aspire to be.”

Carmona’s early works were large in size and expressionsitic, but his newer works have evolved into his new style of expression which he has dubbed “Tropical Surrealism,” which incorporates a new form of universal history, more intimate and compact in size. Wherever there is an important historical occurence, he creates a reflective parody of the people and hidden events within the occurence in an incisive way.

Since 1999 Carmona has lived and worked in Puerto Rico, exhibiting at various galleries, museums, and in curated exhibitions. His works have made their place to the homes of art collectors in America, Europe, and South America.

In 1996 Carmona was honored with a solo exhibition in his new home country of Puerto Rico at the Museum of the Americas in San Juan. In the same year Carmona was also invited to participate in the collective exposition of highly regarded Latin American masters at the Long Island Museum of Art in New York, featuring artists like Frida Kahlo, Fernando Botero, Leonora Carrington, Luis Cruz-Azaceta, Wilfredo Lam, Diego Rivera, Ruffino Tamayo, and many others. He has had works auctioned at many auction houses including Christie’s, Sotheby’s, and Phillips.

Carmona has dedicated this exhibition to his daughter Lola, wife Michaela, and his Godmother Dolores Smithies.

To RSVP for the opening reception please email RSVP@hgcontemporary.com 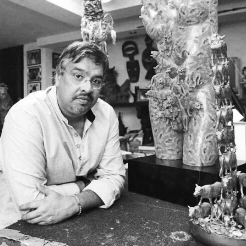