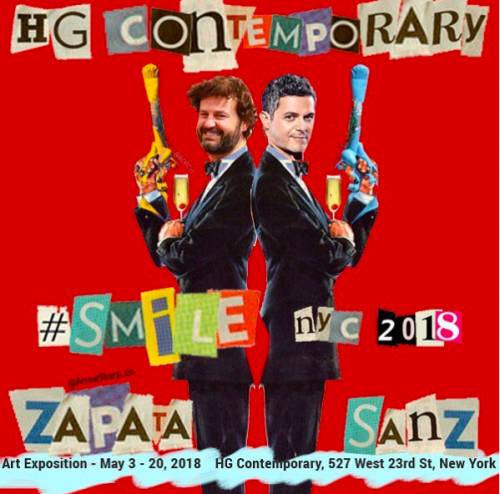 My emotions always traveled through my throat, now I showed them a new way to escape from me through my fingers, through the bridge of my brushes, I only make roads so that the art that is born in me walks towards home, That is what makes you feel, thanks Domingo Zapata for joining me, "the singer wrote Sunday, a day after he presented the show, which is titled Smile , in the city of skyscrapers. During the tour of the same, you can find three of the works that Alejandro Sanz made alone more than three decades ago. And it is that it was in the year 2002 when the interpreter of successes like Mi soledad y yo or La fuerza del corazónHe opened an exhibition after which he managed to sell all his works.

The project, which began to take shape a year ago, began with sketches in a notebook and has ended in the form of paintings, among which The Royal Family,  the first Smilepiece stands out  . "It represents in a way that we are all human beings and that we are all kings," Sanz explained at the presentation of the exhibition, organized in the HG contemporary gallery,  in clear allusion to the aforementioned work. In it appear, by the way, the two authors with a dog and several figures with crowns on their heads. Sanz was in charge on this occasion of the sketches of this work that, later, Zapata captured in a painting.

The friendship between them arose as a result of a concert. Domingo Zapata went with Vicky Martín Berrocalto see Alejandro Sanz and they immediately connected. Shortly after, they returned to coincide in the house that the singer has in Miami and it was then that they discovered the common passion that united them: painting. "In these months we have painted many pictures together ... but I've been painting them with you practically since the first!" imitating and copying with strokes all the feelings you put and give away where you are going ... all the inspiration you've given in the world! Now of your painting ... when you paint you do it like when you write, with love, with intention and with love ... and it's not that I like it as you paint ... it fascinates me and makes me lose track of time and get into that Martian universe that only you know how to draw, I will be with pride and honor, Master Sanz, your eternal apprentice! Thank you for giving me the opportunity to paint by your side and thank you for our friendship that I venerate almost more than the sensitivity that God has given us to create. I love you brother ", Domingo Zapata wrote in an emotional message this week.

The joint exhibition of Alejandro Sanz and Domingo Zapata will remain open until May 15. Then he will travel and arrive in Madrid next June with HG Contemporary. The intention of the two artists is that the exhibition is traveling and also travel through Latin America .