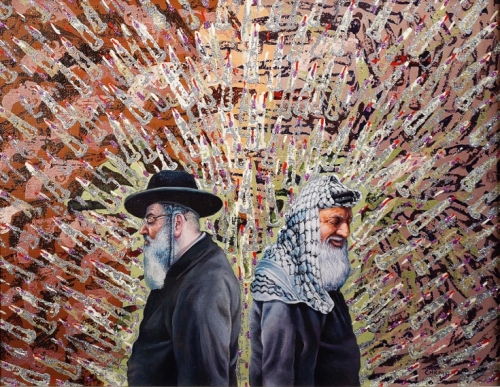 What’s the significance of this new show?

Well, in my almost 30 years as a visual artist, this exhibition represents an iconographic roadmap of the forces that shape today’s world, while bringing to the surface a very personal moment of social rationalization derived from the experiences I have lived in and out of Cuba. These works ine ably highlight the crude and controversial e ects of globalization; they are replete with elements that are political, social, religious, and even, intimate, in nature. In order to shock the conscience of my spectators, while awaking their curiosity, I have also included my collectors from all over the world, so as to make their presence inescapable throughout the show.

Globalization and the Cuban diaspora are recurring themes in your work, how do you incorporate them in this show?

A very frequent theme in my work is the now-commonplace Cuban diaspora, which I portray with a full sense of patriotic responsibility. The “balseros” (drifters at sea), the displaced, the immigrants, whatever their motivation, the ones who return because they have no choice, and other related themes that I have made my own, are all predominant in my artistic vision. The ones who are to blame for everything that’s going on in the world right now are more like tragic clowns or caricatures of times bygone, the interpersonal relations and the morality of earlier epochs are dwindling, as is our preoccupation with our fellow men. As a conscious creator, I see no borders in the psychological or moral hierarchies as they stand in today’s world. A rumba, or a guaguanco, an Adam, or an Eve, it’s all the same. It no longer matters what you represent to others, you can shape yourself to be who you want or aspire to be.

Do you distrust the modern man?

No, never, that would be the same as doubting me. I distrust those who sleep with the masses because I understand that the majority of men are going straight to the dumping ground of historical (trinkets), very few have unique destinies. To follow leaders blindly, like orphan children, has never been for me. I admire men for their prowess to a certain degree, whether they are good or bad is still to be seen. Mankind is progressively leaning closer to its more basic, animal instincts, while the spectators eat popcorn and drink Coca Cola and have chest pains because of war and its aftermath, all in the name of entertainment.Works like: Entre Dios y el diablo (Between God and the Devil), Sin pecado concebido (Conceived without Sin), La política (Politics), Culo de Colores (Colorful Ass), Adam o Eva, o Eva es Adam (Adam or Eve, or Eve is Adam), Capricho por ser Rey (Whim to be King), Reza por ti (Play for yourself), and others, narrate the crude political and religious reality that we live on day-to-day basis.

You have always defined your work as Tropical Surrealism, but now I see that it has changed, it’s more provocative, with a lot of glitz, a lot of recognized characters, juxtaposition of realities; it’s sort of cynical and burlesque, why?

I’m still a tropical surrealist in spirit, form, and content, but always seeking to uncover the root of all problems; striving to understand the everyday man, his desires, his life struggles; unearthing the entanglement of phantasmal uncertainly that surrounds him.There’s a new element that’s incorporated with the introduction of bright shimmers, a certain Pop configuration, if we may call it that. It’s accompanied by a realist landscape, often as background, the combination of which interrupts the reading of the painting on purpose. The trick is to use repetitive shapes on top of preconfigured shapes to generate a new semantic expression highlighted by a daring symbolic representation in the new images, all while maintaining the content intact. This, in turn, o ers a coherent structure within the reading of the particular work. A very important aspect is to parody traditional images of the social and historic reality that I seek to portray. For example, we always see a main character, of more or less importance, being judged by others. That’s a recurrent theme that I explore because I want spectators to ponder about the self-flagellation that men inflict on each other every day. This rings true particularly after I finish some of my works, when I tap into my state of mind and realize that a man is more akin to a thinking cannibal, and it worries me.

What comes to mind when you get asked about Latin America?

I think about underdevelopment, which is still the inability to accumulate experiences, of whatever kind. Nowadays, there are no true politics or politicians by conviction in Latin American. The caudillist disease reveals them for who they are, a sort of mafia that seeks to administer the resources of their country-turned-brothel, all with one end in sight: to deplete and humiliate its most naïve citizens. To achieve this, they tap into the deepest corners of human misery, they cheat, they betray, they lie; there are no ethics or good conscience in the value they promote. Do you want to know the nature of your leader? Dear to criticize and the answer will be revealed. In today’s world, power and hegemony are everything. I see this in the flesh with my own country, Cuba. Before, it used to be “Cuba sí, yanqui No” (Say yes to Cuba, No to the Yankees). And now, it’s “Cuba sí, Yanquis también” (Say yes to Cuba and the Yankees).The light from the Havana lighthouse is shining elsewhere, diplomacy equals hypocrisy, friendships forged over tobacco, rum, flags and hymns, are all part of the folklore. We are going backwards, even more so with all this information technology that allows terror to take over the world. Mankind is willingly surrendering its freedom and what’ worse, forgiving its victimizer, it’s quite the forecast.To conclude, faith is giving way to doubt, we cannot carry our cross for another two thousand years. I suggest we give our thanks and stop asking for more or else we’ll return to the Wailing Wall. I often ask myself whether man is but God’s mistake, or is it God that is man’s mistake.

Is it fair to say, then, that you are living with many uncertainties, and that makes some of your characters and themes so dark?

I have more uncertainty now because of my daughter. Some of the themes are darker because evil is never unclouded, on the contrary, it becomes darker and gloomier as time progresses. It is repugnant to see the trove of characters that arise from populous mandates, those who actually exert a negative force on the natural progression of social systems. Some are bound to disappear, and others base their success on empty promises, it’s all a great theater of the absurd, without a script and many soulless accomplices. And they all stand around, waiting for the death of a final act that never comes. But I guess there are people for everything, even when the thing they pursue is the garden-variety type of opportunism that is so common in these dictatorial times that we live.

What do you expect with your new incursion into New York?

I don’t expect anything, those who expect something, always remain sitting down. I rather be walking, wandering towards controversy, and prompting a debate with my audience, hoping that my work speaks for itself. I can only hope that this show identifies my place in the world and I’m sure it won’t go unnoticed, especially in New York, where the curious spectator is waiting to see the outcome of this happier Macondo that I now live in. That spectator resists the distorted truths and the actions that seem to fall on the same patterns, as if on an endless, premeditated rotation. It seems as if mankind is so entranced by obsolete memories, that it cannot free its soul. There was a famous homeless man in Cuba, who used to say,

“I don’t blame you for your poor memory, I blame you because you never learned how to have it.” Those words ring true
for me.Listen, men will always make either ruins or castles out of their temples and I see that we are too entranced with the virtual reality. But I trust that, little by little, we will care about the future again. So long as human biology doesn’t fail me,
I will continue to believe in our species’ improvement. And as a final reflection I tell you this, we will only rebel against the establishment when our desires are not confined in a particular vessel, but become the sole reason for our existence. This show that I will have in New York is the success of all my failures, is the result of knowing that our journey through this world is marked by other’s unfulfilled sins. I propose that we undress our spirit, like Francisco. Then, and only then, will we realize that we only need that which was given to us upon birth, life itself. Life is simple; it is fear that complicates it.

I’m done talking, Salud and give me another double whiskey.

(A bar conversation with my friend and gallerist, Philippe Hoerle-Guggenheim.)