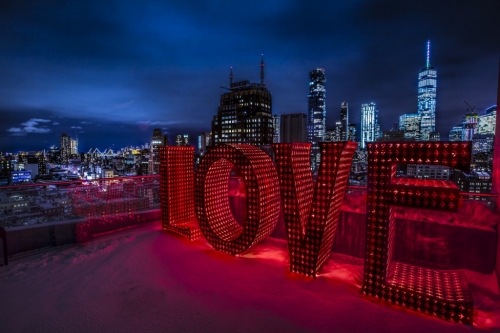 “We give words so much importance in our lives and relationships, but when I create art using words, I make them more beautiful. Then they do speak…they come alive.” These are the words of Laura Kimpton, a California-based artist whose large-scale sculptures play with language and the power of words. In addition to making sculptures, Kimpton paints, makes clothing and engages in performance art, making her an all-around Renaissance woman. Her thought-provoking, purposeful work strives to deliver a message that unifies people.

Her sculptural work with individual words began at Burning Man, the annual construction of a temporary city in the Nevada desert. In the spirit of self-expression, art and community, Kimpton installs giant words that people interact with in a variety of ways. Her installation of “MAGIC” at 2016 Burning Man now has a home in Miami’s Magic City Sculpture Park as part of a community restoration effort. Her six-foot “LOVE” sculpture can be found at The Venetian, a Las Vegas hotel. These sculptural words are so large that onlookers have no choice but to read and consider them. All of the word sculptures feature small cutouts of birds that give the words their perforated look. These birds are included in honor of Kimpton’s late father and represent the freedom of the human spirit inherent in each

word that she chooses.

“If WORDS could SPEAK” runs till 26 May at HG Contemporary: 527 W 23rd St, New York. The showcase is a blend of her talents, including installations and performative works. One of the features is the six-foot word “EGO,” which was smashed with a sledgehammer on opening night. In its rubble, a three-foot “EGO” will remain.