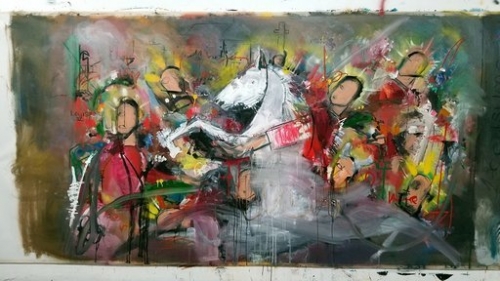 Distinct and innovative, artist Louis Carreon is somewhat of a staple when it comes to LA street art. While recently signed to Philippe Hoerle-Guggenheim and HG Contemporary’s roster, as well as having several A-list celebrity clients, Carreon’s chill demeanor says it all: he makes art for the culture, not the fame. The notoriety comes from being so damn good at it.
Starting with nothing more than a spray can and influence by a street art gang, Carreon would soon be consumed by the graffiti world in Los Angeles (“before graffiti was cool”). He was mesmerized by the language of graffiti, the way it was hidden in plain sight. Artists communicated with fellow artists in a manner outsiders wouldn’t understand. Life would take a turn for the young Carreon, however, as a drug addiction eventually sent him to federal prison. But it was within these two years that helped shape his aesthetics, honing his style in sketchpads while educating himself on the craft.
Today, Carreon is known for the reception of street art as fine art. Most recently, his installation on the corner of Melrose and Fairfax – the center of all things cool in LA from murals to fashion, from leading brands to Instagram-worthy backdrops – was vital in reinvigorating the way people see art in the community. “It was the perfect location. The intersection is the heart of a lot of things, so the installation was accessible,” notes Carreon. Bringing high end art to the streets, the exposure provided a boost in aesthetics in an area once marred by gang art.

“I can’t compare myself to anyone and I wouldn’t want to,” Carreon bluntly states when asked which artists contrast to his. Having traveled to many major cities, nationally and internationally, Carreon has defined his style to a tee. He’s not one to “see others as competition” simply because there is no need to do so. Carreon finds success in his own lane with pieces that make bold statements, putting his unique spin on iconic pieces such as The Last Supper.  This year, to celebrate the signing with HG Contemporary, Carreon debuted art at Zona Maco titled “Bendicion.” Additionally, a collaborative effort with Bob Zangrillo was seen at Art Basel alongside Art Basel’s title sponsor UBS, which included pieces depicting plastered ballerinas, a “reflection of dreamers who fall victim to addiction on the way to success.” It is a proclamation many can relate to, be it a singer, model, actor, or filmmaker, where not everyone makes it out better on the end.
Carreon continues to blaze trails with his unmistakable form, a maverick exemplary of inspiration. You can say his life is poetic and artful itself, molding a past of mishaps into a masterpiece.