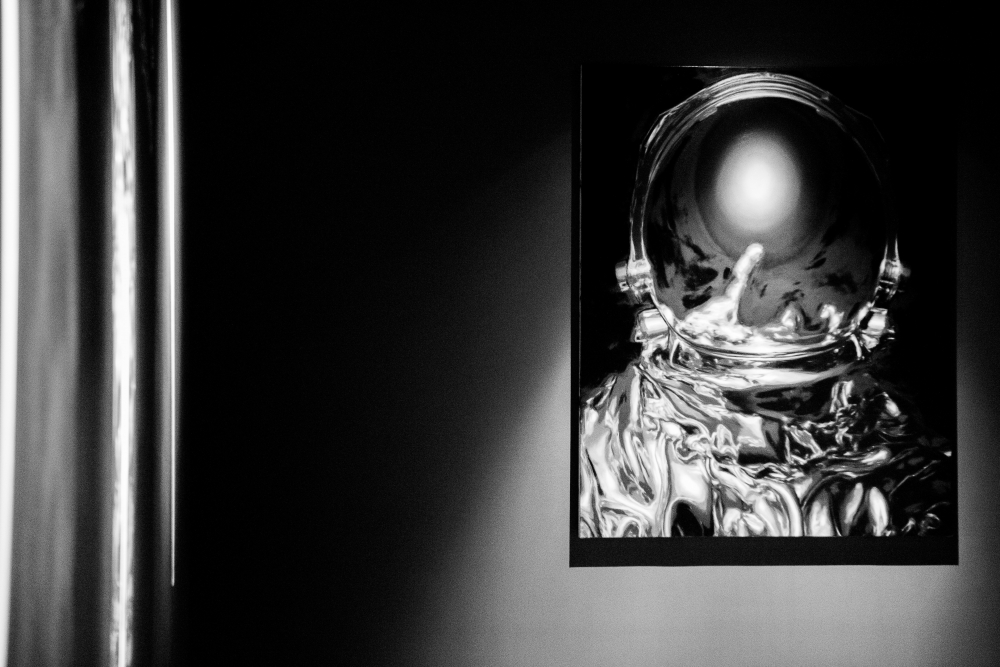 The vernissage is already through. Painted the pictures: Marc Gumpinger.  One may call the change from information technology to the art world an unusual career jump, but for the 43-year-old both are close together. "Writing software is like making art, something like that happens, at least in my mind, so the path was not that far," says Gumpinger of the German Press Agency. And yet one wonders: How does an IT expert manage to mix his oil paintings with the New York art scene?  Computer art is not an invention Gumpingers. The mix of technology and free artistic design has occupied man since the 1980s, when the microchip generation learned to walk. The eternal question is: Is it still art when a computer itself takes on the essential steps of a freelance artist? Is the calculator an aid such as a brush and a camera, or does the device, with complex calculations, go too far into what a human being can do in his own creativity?   "The biggest effort is mine," says Gumpinger. For his paintings, he uses software, as they also use 3D artists for Hollywood films, finished motives. The computer computes these into pictures, which Gumpinger then paints in oil. "My grandma was a painter, my uncle is a painter," says Gumpinger. "I'm just lucky that it's easy for me." His works create depth and do not give the impression of being brought to the screen with technological help. Gumpinger calls the calculations of the computer a "stupid but very demanding process".

If one understands the laptop as aids such as optical devices and lenses in times of Caravaggio, Velázquez and Leonardo da Vinci, computer art grew over centuries. Already the artists who used lenses in the 15th century to project their motifs on a canvas would have worked with "high tech", says Gumpinger. His way of working, rendering models with 3D software and then painting with oil paints, is ultimately the same.  Once you stand in front of Gumpinger's floating astronauts, larger questions soon emerge. For the Munich man not only revives the figure in oil on canvas, but reproduces it as a life-size sculpture milled in CNC. "What is real and what is wrong? Is it more real now because it can be touched? Or is the painting real? Can I touch it?" Asks Gumpinger in anticipation that there is no clear answer. "Or is both not real, because it's not an astronaut? It does not exist, but it's on the computer." Greetings from René Magritte.  Anyone who breaks away from the HG Contemporary Gallery, uses a smartphone to check the vehicle broker Uber bucht and check his e-mails in between, has to ask himself: What does digitization mean today? Should artists in the 21st century not deal much with what it means to be dependent on computers? And is not art too analog for today's level of digitization?  Gumpinger, who made his own software at the age of nine at his C64, wants more technology awareness from classical graduates of the art academies. Whether he sees himself more as an artist or as a software developer, he himself can not answer these days precisely. But one thing is certain: "We have to understand even better what technology really means."