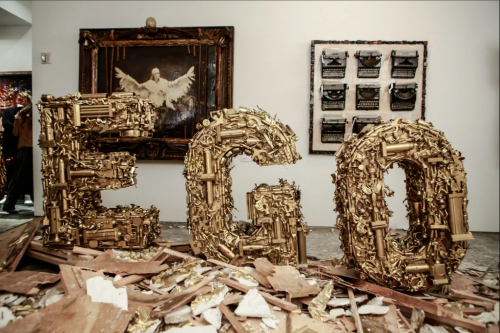 “That’s me flying from a crane in a bird costume,” says artist Laura Kimpton, pointing out the three videos installed inside her monument sculpture at HG Contemporary. “The video guy just took the wire out. And that’s my 30 by 60 foot ‘Ego’ at Burning Man, made of 10,000 trophies. And then down below is a burning house, and I’m flying out of the burning house.”

The artist’s latest solo show, “If Words Could Speak,” recently opened at Philippe Hoerle-Guggenheim’s gallery located in Manhattan’s Chelsea art district. The daughter of hotelier William Kimpton (her sister is the novelist Jennifer Egan), she defines herself as a teacher, and has spent her life traveling and living as an artist. Kimpton has carved a unique space for herself within the art world, parlaying her popular word installation art at Burning Man into the more formal gallery space. “I’m the most well-known artist at Burning Man, and that takes a lot of work to get that,” she says. “I’m not an artist because I make product, I am an artist because I am an artist. Just how I live.”

Although she’s known mostly for her giant word sculptures, including a rainbow metal “Love” perforated with the outline of birds on display in the gallery’s entrance. (A red version has been shown at The Jimmy Hotel in SoHo as well as The Venetian in Las Vegas). “I have a lot of birds in my work, because — one, it represented my dad when he died, birds followed me,” she explains. “And then also, if I had to pick a superior animal, I would pick a bird because they fly and are in balance with nature, and treat their young with respect.” Other jumbo word sculptures she’s built in the Nevada desert include “Dream,” “Believe,” “Live Dream Be OK,” and “Ego,” which she has destroyed by fire and, for the gallery show on opening night, knocked down with hammers. Overall, it’s a very Burning Man-esque spread.  “People love the O — they sleep in the O, they love the O,” she adds of the letter’s popularity, which appears in many of her words, at the annual desert gathering.

Her show at HG Contemporary also includes several wall-mounted works constructed of “junk” — she identifies as an assemblage artist and compares her work to Robert Rauschenberg. “There hasn’t been a new junk-artist that’s made it in a long time,” she says. “This piece — you don’t know which piece might have cost me $4,000, $2,000 dollars,” she explains of “Dirty Girl Carnival.”

Upon inspecting the piece, she noticed that a piece of it had gone missing. “Someone took it — wow. I put my monkey in the shooting range,” she says, pointing out the space where mini-monkey figurine had formerly stood to Hoerle-Guggenheim. “It’s OK. I’m not saying sometimes I’m not a little bit of a klepto myself,” she adds. “I lose a lot of stuff. I believe it goes into the world and has a life. One thing that Burning Man taught me is that art is sacred, but it’s not sacred, it can be destroyed. It’s about the process — I’m a process-oriented artist.”

Another artwork on display involves bills oriented into the stripes of an American flag. “I made this piece because I love that our money says ‘In God we Trust,’ because we’re supposed to be a nonreligious secular country,” she says. “People always put, because of my last name, that I’m extremely wealthy, so I just gave away all of those million dollar bills,” she continues, quickly adding that the bills are in fact fake. “It’s a joke on that.”

Kimpton’s work has a definite political bent, and soon enough her art may make its way to the capital of American politics.

Kimpton and Hoerle-Guggenheim, although at first glance an odd pairing — Kimpton exhibits a free wheeling hippie-vibe, while Hoerle-Guggenheim plays the suited gallerist trope — one could chalk their meeting up to kismet. Kimpton explains that they met at a small, intimate Oscars party a year ago.

“It was an after party, but I think it was the Vanity Fair party,” Hoerle-Guggenheim clarifies. They ran into each other again shortly after, and, hitting it off, teamed up to produce a gallery show. However despite all of his recent proximity to Burning Man culture, Hoerle-Guggenheim hasn’t yet made it out to Black Rock Desert himself.

“That’s actually the irony,” he admits. “But I do like theoretically everything about it.”

“If Words Could Speak” is on view through May 26.