It was a sweltering Thursday in Chelsea, as a small line formed in front of HG Contemporary Gallery to get in to see the latest exhibition, “Smile” by Spanish-American artist Domingo Zapata and Alejandro Sanz, a Spanish singer-songwriter. The two creatives were introduced in Madrid and are friends since some five years back.

Philippe Hoerle Guggenheim, the owner of Hoerle-Guggenheim Contemporary, is known for producing shows that embrace groundbreaking aesthetics and concepts that are a little out there so it came as no surprise to me that Alejandro and Domingo come from different artistic backgrounds and disciplines. The exhibition, which was meant to be seen as a “super meeting of the minds,” and a collaboration that echoes the vibrancy and personality of artists like Picasso and Basquiat only reinforced the following: why don’t I know who Domingo Zapata is and how has this gallery attracted so many people in the middle of a heat wave during Frieze Week?

“The New York Times” wrote an article in 2013 called “Domingo Zapata’s Best Known Work May Be Himself,” which basically says it all: Zapata is his own best publicist and promoter. Hailing from Palma de Mallorca, Zapata maintains a jet-set lifestyle living close to his collector-base with studios in New York, Los Angeles, and Miami. He is chummy with famous Damien Hirst, and Pablo Picasso’s granddaughter, Diana. And, on top of all of that, Zapata is known for being hospitable, and for throwing great art parties—he invited more than 2,000 guests to a party he threw at Art Basel Miami Beach in 2012. 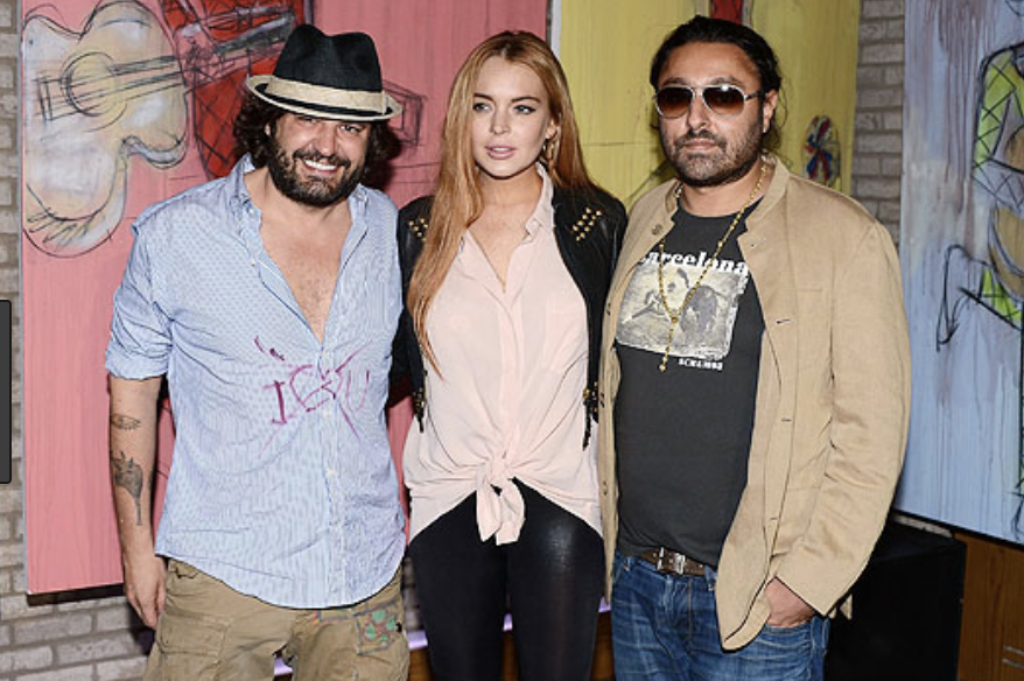 Domingo Zapata, Lindsay Lohan, and Vikram Chatwal at Zapata’s opening of “Life Is A Dream,” Dream Downtown, May 10, 2012.

Zapata, who at the time the article in New York Times was written was thirty-eight years old, rubs elbows with numerous celebrities including Leonardo DiCaprio, Scarlett Johanson, Lindsay Lohan—just to name a few. According to the “Daily Mail UK”, an exhibition Zapata put together in 2004 led to billionaire George Soros buying one of his pieces, and the rest is history.

This is not to say that Zapata has never been recognized for his artistic talents or creative endeavors— in February, he put together “Be Yourself, Tags Are For Facebook,” a fashion show that premiered during fashion week. Celebrities like Jordi Mollá, Alba Díaz Martín, daughter of designer Vicky Martín Berrocaland bullfighter Manuel Díaz “El Cordobés,” actress Kelly Rutherford of “Gossip Girl,” famous chef Jean-Georges and the painter’s children: Paul and Domingo, walked during the show in order to raise awareness about discrimination and homophobia towards the LGBTQ community. Zapata donated all the proceeds of the fashion show to the organization “Camp Aranu’tiq,” which offers safe and fun camp experiences for transgender youth.

It goes without saying that some artists have achieved celebrity status (think Damien Hirst, Jeff Koons, or even Bansky) without even so much as inviting George Clooney to a party, but their work and artistic profiles are known by the art world at large. Is an artist really an artist if nobody in the art world has ever heard of him?

Take Damien Hirst for example, represented by none other than Gagosian Gallery. Hirst is undoubtedly an artist that everybody at one point in time has at least heard of—whether you are familiar with his spot paintings or his taxidermies animals—and his work gets written up constantly. Sometimes it is not always pretty—Hirst’s inaugural exhibition in Venice was chalked up by “ARTNews” as “undoubtedly one of the worst exhibitions of contemporary art staged in the past decade.”

Zapata, however, remains absent from key art publications such as the highly touted “ARTNews” magazine. Managing editor Barbara Adams was quoted as saying she knew little about him, except for the fact he’s a “little” linked to the fashion world. And does this matter to him? Probably not, as Zapata has defined himself an artist in his own right and has certainly generated enough publicity to get people off the hot streets and into the air conditioning.

The exhibition is comprised of almost fifty works and is an ode to friendship. Zapata explains that he, together with Sanz, sketched out the works together in a notebook and then re-worked them onto a larger canvas. Their aesthetics follow the Zapata’s signature neo-expressionist, graffiti-esque style infused with pop-cultural elements. Three are Sanz own works made some fifteen years ago. A renowned musician, Sanz has won seventeen Latin Grammy Awards and several awards from the Spanish and American government but, felt largely absent from “Smile.” 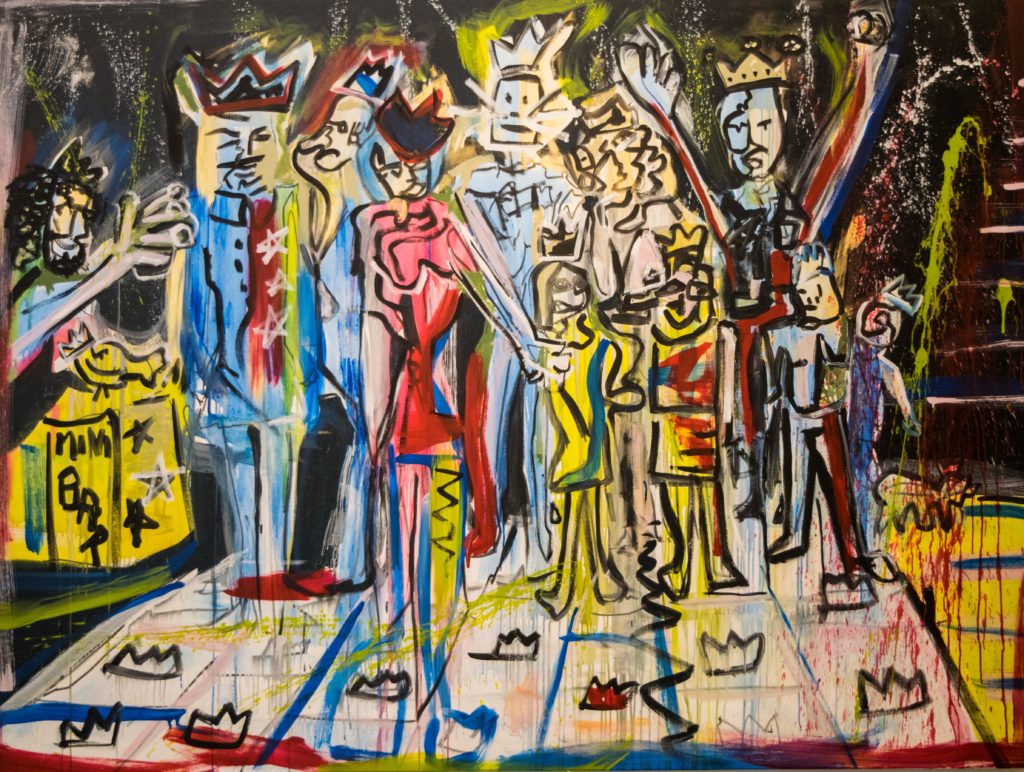 The exhibition’s centerpiece, “The Royal Family,” represents an incident caught on film revealing tensions between two powerful figures, Queen Letizia of Spain and her mother-in-law Queen Sofia earlier this year. The footage, that went viral, caught Letizia blocking Sofia when the royal family celebrated Easter in the cathedral in Zapata’s hometown Palma de Mallorca. Perhaps this vibrant large-scale painting is an attempt for Zapata to portray his own relationship to the institutional art world?

To give Zapata credit for his social virtuoso, the opening of “Smile” was one of the crowded and positive exhibition openings I’ve been to in awhile—despite the heat, people seemed genuinely excited to be there and support him. Zapata himself was not shy nor did he give off the air of “I’m too famous to be here”—you could see him bouncing from room to room wearing a tan safari hat, stopping to mix and mingle. His laid-back look, tousled hair, and relaxed attitude was the antithesis of the cold crowd that normally flocks to galleries in Chelsea. 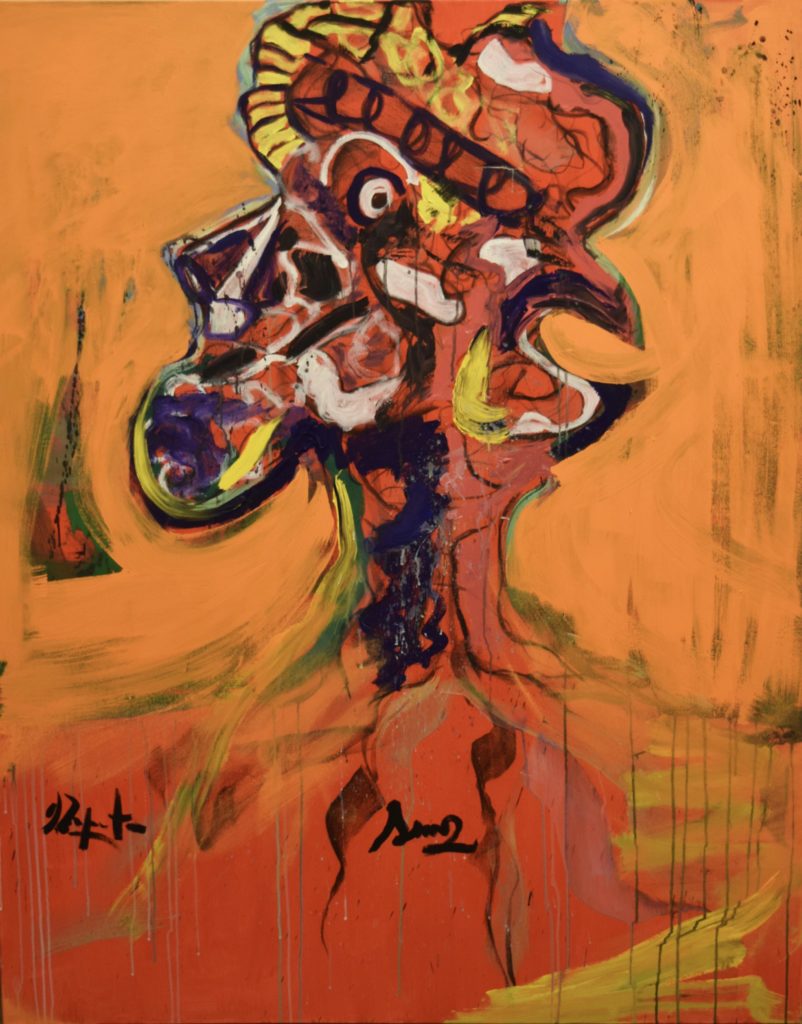 After a few laps around the gallery, it was time to leave. “Smile” revealed a lot more about Zapata’s incredible dedication to making a stamp on the art world and his far-reaching social connections than it did about his graffiti-esque paintings. His situation seems akin to James Franco, who over the years has been trying to make a name for himself in the art world with none other than Pace Gallery president, Marc Glimcher. Many in the institutionalized art world bemoan the quality of his work. “It’s hard not to feel some sympathy for him, while also wishing that someone or something would make him stop,” the art-critic Roberta Smith wrote about his art in the “New York Times” in 2014.

The actor-turned-artist Adrien Brody and Mr. Brainwash, the French-born L.A. based graffiti, can be placed in the same category of artists who have accrued large followings without backing from the institutionalized art world. Last week, Adrien Brody’s booth at Art New York received a mention in “Page Six,” which, invariably has a larger readership than any art publication. With the support of Banksy, Mr. Brainwash rose to fame after his first exhibition attracted an audience of 50,000.

As the numbers of galleries grow each year and art collectors become empowered by the emergence of online art sales platforms and the proliferation of international fairs it is not a surprise that some galleries turned to artists like Mr. Brainwash and Zapata that have an established high-profile following, even if they are outside of the art world. Despite the fact that a lot of Zapata’s popularity has to do with his celebrity friends and allies (which he does not deny), it is almost hard not to admire Zapata’s desire to soldier on with the hopes that one day, he too will be on the walls of the MoMA and the Guggenheim.