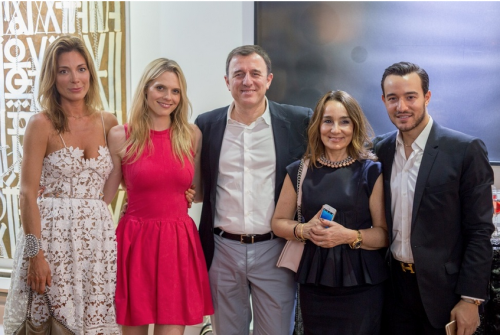 Luxury real estate firm, RLTY NYC celebrated the grand opening of its SoHo office at 518 Broadway on Monday, May 11th with an unprecedented collection of artwork curated by Hoerle-Guggenheim Gallery. The company also disclosed its partnership with the gallery to provide fine art advisory services to its premier clientele.

“We are honored to expand RLTY NYC’s presence into SoHo,” stated Mr. Benalloul. “We believe that the aesthetic of our new office space will foster camaraderie between our local art and real estate communities, and we look forward to the continued evolution between our two fields.”

“To an unsophisticated buyer navigating the art world to purchase contemporary art can be a daunting task,” said Albert Benalloul, co-founder of RLTY NYC. “This is not unlike those who are in the market to purchase or sell their own residence. Hoerle-Guggenheim Gallery is offering its expertise in selecting and negotiating art works for purchase, and along with RLTY NYC, the two firms together will offer a synergy in art and real estate not found anywhere else in the marketplace.”

The firm will welcome 35 agents to the space, which features 15 foot ceilings and windows overlooking one of the city’s most bustling neighborhoods. Decorated by Newel, a fourth generation Decorative Arts firm in New York City, the décor reflects a blend of traditional and modern design in a loft setting and is fully equipped with ThinkPad technology.

“We are proud to launch RLTY NYC’s new office. With continual and rapid growth, we identified a need for expansion and SoHo was visually the most representative of our innovative and modern approach to real estate.  I look forward to continued success in this neighborhood,” said Emir Bahadir, co-founder of RLTY NYC.

RLTY NYC’s first office and headquarters, located at 555 Madison Avenue, opened in 2014 and the company has since outgrown this space.