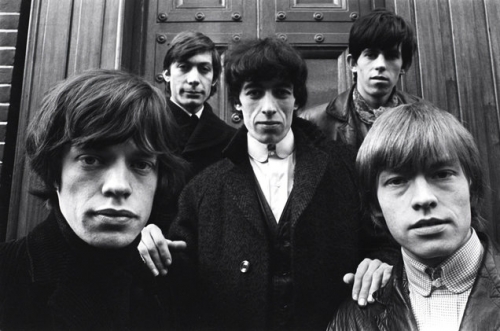 The 200-piece collection, amassed by a private collector and longtime friend of the iconic band, offers an intimate glimpse into The Rolling Stones’ creative process and lifestyle -- depicted through original artwork, photography, handwritten set lists, manuscripts and collaborative projects. “The Stones aren’t just musicians. They’re immortal. They are the definition of rock 'n' roll,”  Gallery founder and director Philippe Hoerle-Guggenheim tells Billboard, “I am honored to do this show. I love how it ties in visual art, musical art and fashion art all in one space.”

The anonymous collector, who has accumulated one of the largest private collections in the world, first met Ronnie Wood in London 20 years ago. The two became close friends and, as a longtime fan of the Stones, the collector began to accumulate Wood's art. Over the span of two decades, he has accrued hundreds of memorabilia and artwork related to the band. The very first piece in his collection was a Rolling Stones keychain—a tongue bottle opener—that to this day he still uses.

Some of the show’s highlights include Mick Jagger’s hand-written lyrics, a drawing co-created by Ronnie Wood and Keith Richards, and an original hand-painted “Bigger Bang” tongue guitar by Ronnie Wood—the band’s most accomplished visual artist. The exhibit will also showcase collaborations with major contemporary artists who have worked closely with the Rolling Stones, including Andy Warhol, Peter Beard, Jeff Koons and Sebastian Kruger. Rare concert t-shirts, mugs and hats will also be available for sale; prices range between $5  for wristbands and $200,000 for paintings. Each item on display will be sold in the gallery and online through Paddle8. The show runs from Nov. 3 through December at HG Contemporary Gallery (527 West 23rd Street). Here, a sneak peek at what to expect.

Mick Jagger's Handwritten Lyrics to "Dancing in the Street," 1985.

This Motown hit was written by Marvin Gaye, William "Mickey" Stevenson and Ivy Jo Hunter. In 1985, Mick Jagger hand-wrote the lyrics for his duet with David Bowie to support a Live Aid fundraiser. Bowie and Jagger recorded this song and filmed the music video within the span of 13 hours.

Warhol and Jagger first met in 1963, before the Stones were well-known in the United States. Warhol designed the cover art for the band's 1971 album Sticky Fingers -- a risqué photo of a man's crotch and half-opened zipper -- and designed their 1977 album Love You Live, which features photographs of the band sticking their tongues out, licking and biting one another, taken by Warhol. These iconic images were duplicated on bags, tablecloths and decor during the 1977 album launch party at club Trax in New York City.

Richards and Wood drew this in Montserrat during the recording of "Steel Wheels" at AIR studios. The drawing depicts a shirtless Keith as the devil, sitting on a balcony railing wearing no shirt, purple pants, horns and a spiked tail. "Ronnie and Keith both attended art school and drew together in a process similar to the musical 'weaving' they do on stage when both play lead guitar," gallery owner Philippe Hoerle-Guggenhem tells Billboard. "Ronnie would draw part of the picture and then pass it to Keith, and the two would continue to pass it back and forth until they created something beautiful."

This original Ronnie Wood painting depicts Ali as he towers over Sonny Liston in the famous knockout during the heavyweight match on May 25, 1965. This painting is a study for the painting that Ronnie released as a limited-edition print, 100 of which were signed by both Wood and Ali. One of these prints, for sale at HG Contemporary, is embellished with an Ali quote, handwritten by Wood. Ali and Wood developed a close bond after the two met in 1978 in New York City before Ali's re-match with Leon Spinks. Ali has been the subject of several artworks by Wood, many of which were auctioned during fundraisers for Ali's charity, The Muhammad Ali Center for Peace.