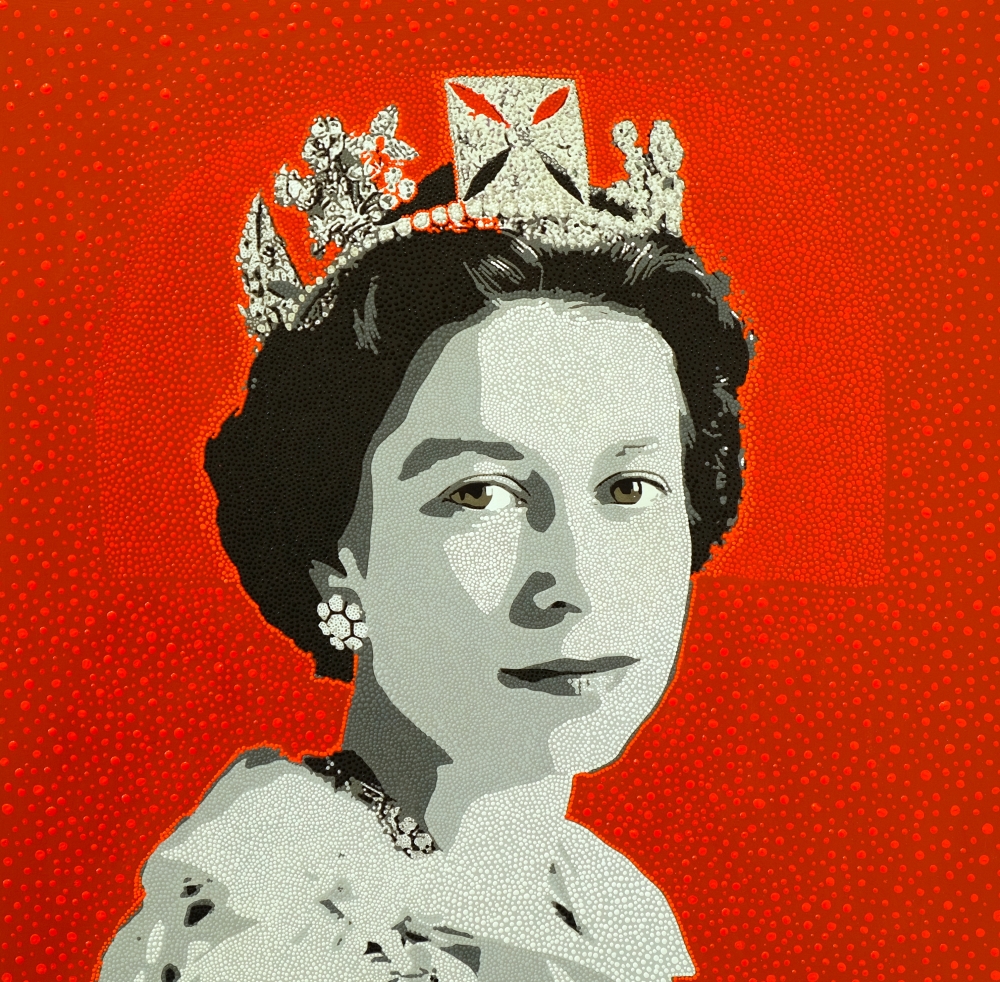 As art mimics life, Philip Tsiaras has taken note. The Greek artist is known for his hand-dotted works, which he says are made up of "particle atoms.” In his latest exhibit, titled Dot Pop Portraits and on display at the HG Contemporary, his pointillist art is front and center, taking the shape of notable figures like Steve Jobs, Jackie O, and John F. Kennedy and Princess Diana. The multi-colored portraits come to resemble a sort of modern-day Roman mosaic, each embodying the personality of the icon it represents with meticulous attention to detail.

Tsiaras has explored art in many of its forms—painting, photography, ceramics, and bronze and glass sculptures. For Philippe Hoerle-Guggenheim, founder and curator of HG Contemporary, showcasing Tsiaras’ work was a natural choice. “I do everything out of intuition,” Hoerle-Guggenheim said.“I just want to see something that I feel like I haven't seen before.”

We caught up with Tsiaras at the opening of his show, where he shared with us his inspiration and thought process behind the exhibited works.

Tell me a little bit about the exhibition.

I started doing photography 30 years ago, and I did portraits originally. So the portrait is an early aspect of my work. I've gone through the whole gamut of making art—glass sculpture in Venice, bronze in Verona—and then I came back to the portrait in a painterly fashion. This dot has been in my work for 15 or 20 years in a variety of forms, but in this particular thing, I merited the portrait of photography and the dot into a new kind of imagery. These are the dot portraits.

When you start a piece, how does the process work?

First, I identify the character. Picking the person is not the easiest thing. I've done Putin and Trump together because I wanted to have a semi-political statement. All of the duets, these long works, are two characters that are fused together in antagonistic relationships. I also did a mirror image of the Queen of England as a playing card. So I'm playing along with personality and what happens when they are recreated in my image.

Of all the figures featured in this exhibit, who would you want most to have experienced it?

Perhaps Lagerfeld, because no one has done it. The reason I like Lagerfeld is because he's the end of the great fashion designers. Now it's just a bunch of people we know, but no giants.

Did you start that painting before he passed?

No, he had just passed and I thought I should do something absolutely current because I was always fascinated by him. He was also a photographer and whatnot. I said, “Okay, I'm going to do him,” and he came out great. He's the only person whose eyes you cannot see.

What do you hope others take away from this exhibit?

It's a sexy show with a lot of hand work. I think it's light in a way, it's playful. I think it's a pleasurable experience, seeing these works. I enjoy doing them. Working on these portraits has given me this karmic connection to every single character. It takes about a month to do one, and you are really in their face. Every little tiny thing—the nose, the shadow of the nose, the lips—it's an incredible experience for understanding the portrait.