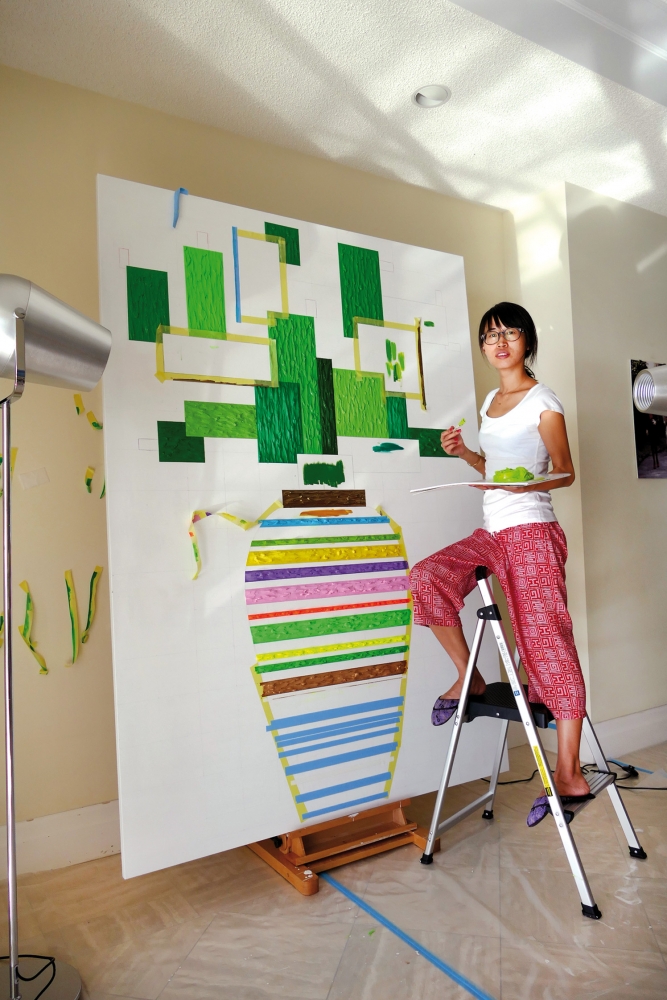 For instance, there is little denying the supernova interior designer now busily preparing the nursery for the arrival of the triplets of the creative force majeure Pharrell Williams and his wife Helen Lasichanh would go nuts for the work of Zhenya Xia, which would feel right at home in their new children’s quarters. Ditto, too, Beyonce and her expectant twins or even Amal & George Clooney where the work of Zhenya Xia would make the most joyous and perfect and exuberant addition.

Zhenya Xia’s story is much like her art: ”something unique that stands on its own,” as her gallerist Philippe Hoerle-Guggenheim aptly put it. After growing up with the demands of a rigorous Chinese education that was followed by years of training in finance, Zhenya embraced a life-long yearning to produce art. When asked to paint her sub-conscious while a MBA graduate student in France as course study, she had a eureka moment and fully realized that painting was indeed her true calling. She left the world of finance and picked up her first canvas, easel, paint and brushes and has not looked back since.

Her distinct style – bright colors, dream like themes, mathematically balanced brushstrokes exude a certain innocent, childlike, infantile purity that has all come to glorious with her recent highly successful and first solo show at the HG Contemporary Gallery at 527 West 23rd Street in New York City. (www.hgcontemporary.com). Zhenya’s work skillfully offsets her childlike motifs with a calculated and highly schematic expression, which by applying her generous thick coats of textured strokes renders a certain depth which captures shape and light from any angle. There is sparkle, there is innocence (yes that word again), there is an unbridled self-confidence on display here.

And so on a recent early day in the throes of a blooming New York City spring the artist and her gallerist sat to speak and shared a few thoughts of her work, her first solo-show and her future expectation.

I have dubbed your work – Art d’Vivre!

ZHENYA XIA: A child’s world is a wonderland. I paint flowers because I want to be optimistic about our future. We are always very skeptical about the future, but my work is about a bright joyful future.

How did you meet Zhenya Xia?

PHILIPPE HOERLE-GUGGENHEIM: I saw one of her works at a dinner party and I found the work intriguing. The work was different and evoked a certain emotion like I have never experienced before so I had to meet her. I went to visit Zhenya at her studio in the Cayman Islands and had the opportunity to circumspect the full body of her work. Her high level of detail and perfection and her nuanced use of color was what drew my eye to her canvases. Every shape or rectangle seems perfectly fussed over, for want of a better word. I just find her work quite beautiful. How she asserts her particular take on joy and beauty is what has attracted me the most.

You have said that you were ”drawn to her calculated, clean lines.” But what is that one pitch you would give to a collector as to why owning, say, Zhenya Xia’s exuberant acrylic on canvas – Ice Cream Tutti Frutti – which is for sale at the eye-watering price of $45,000. That’s a lot of money to be asking for the work of a contemporary ingenue.

PHILIPPE HOERLE-GUGGENHEIM: I see very long term value here. Zhenya’s work cannot be compared to anyone else’s. She has a totally unique and one-of-a-kind signature, and although that can sometime be a hard slog to sell. Zhenya is creating an entirely fresh and novel genre. There is no denying that a Zhenya Xia painting is immediately identifiable.