Screenprints on Lenox Museum Board

For information about other available works by Andy Warhol please contact the gallery at info@hgcontemporary.com.

Andy Warhol was born Andrew Warhola on August 6, 1928, in a two-room row house apartment at 73 Orr Street in Pittsburgh. His parents, Carpatho-Rusyn immigrants Andrej and Julia Warhola, had three sons. Andy was their youngest.

Devout Byzantine Catholics, the family attended mass regularly and observed the traditions of their Eastern European heritage. Warhol’s father, a laborer, moved his family to a brick home on Dawson Street in 1934. Warhol attended the nearby Holmes School and took free art classes at Carnegie Institute (now The Carnegie Museum of Art). In addition to drawing, Hollywood movies enraptured Andy and he frequented the local cinema. When he was about nine years old, he received his first camera. Andy enjoyed taking pictures, and he developed them himself in his basement.

Andrej Warhola died in 1942, the same year that Andy entered Schenley High School. Recognizing his son’s talent, Andrej had saved money to pay for his college education. Warhol attended Carnegie Institute of Technology (now Carnegie Mellon University) from 1945 to 1949. He earned a Bachelor of Fine Arts degree in Pictorial Design with the goal of becoming a commercial illustrator. During these years he worked in the display department at Horne’s department store.

Soon after graduating, Warhol moved to New York City to pursue a career as a commercial artist. His work debuted in Glamour magazine in September 1949. Warhol became one of the most successful illustrators of the 1950s, winning numerous awards. He had a unique, whimsical style of drawing that belied its frequent sources: traced photographs and imagery. At times Warhol employed the delightfully quirky handwriting of his mother, who was always credited as “Andy Warhol’s Mother,” Julia Warhola left Pittsburgh in 1952 and lived with her son for almost 20 years before her death in Pittsburgh in 1972.

Warhol rewarded himself for his hard work by taking a round-the-world vacation with his friend Charles Lisanby from June 16 to August 12, 1956. They toured Hawaii and many countries in Asia and Europe. It was Warhol’s first trip abroad and a significant event in his life.

Serendipity 3, a trendy restaurant and ice cream parlor located on Manhattan’s Upper East Side, was a place where Warhol sometimes exhibited his work. He often held parties there--his friends could gorge themselves on the restaurant’s signature “frrrozen hot chocolate” while helping Warhol hand-color his self-published artists’ books.

In the late 1950s, Warhol began to devote more energy to painting. He made his first Pop paintings, which he based on comics and ads, in 1961. The following year marked the beginning of Warhol’s celebrity. He debuted his famous Campbell’s Soup Can series, which caused a sensation in the art world. Shortly thereafter he began a large sequence of movie star portraits, including Marilyn Monroe, Elvis Presley, and Elizabeth Taylor. Warhol also started his series of “death and disaster” paintings at that time.

Between 1963 and 1968 Warhol worked with his Superstar performers and various other people to create hundreds of films. These films were scripted and improvised, ranging from conceptual experiments and simple narratives to short portraits and sexploitation features. His works include Empire (1964), The Chelsea Girls (1966), and the Screen Tests (1964-66).

Warhol’s first exhibition of sculptures was held in 1964. It included hundreds of replicas of large supermarket product boxes, including Brillo Boxes and Heinz Boxes. For this occasion, he premiered his new studio, painted silver and known as “The Factory”. It quickly became “the” place to be in New York; parties held there were mentioned in gossip columns throughout the country. Warhol held court at Max’s Kansas City, a nightclub that was a popular hangout among artists and celebrities. By the mid-1960s he was a frequent presence in magazines and the media.

Warhol expanded into the realm of performance art with a traveling multimedia show called The Exploding Plastic Inevitable, which featured The Velvet Underground, a rock band. In 1966 Warhol exhibited Cow Wallpaper and Silver Clouds at the Leo Castelli Gallery.

Warhol self-published a large series of artists’ books in the 1950s, but the first one to be mass-produced was Andy Warhol’s Index (Book), published in 1967. Two years later he co-founded Interview, a magazine devoted to film, fashion, and popular culture. Interview is still in circulation today. His later books include THE Philosophy of Andy Warhol (From A to B and Back Again) (1975), Exposures (1979), POPism (1980), and America (1985). Most of his books were based on transcribed conversations.

In 1974, Warhol started a series of Time Capsules: cardboard boxes that he filled with the materials of his everyday life, including mail, photos, art, clothing, collectibles, etc. The artist produced over 600 of them and they are now an archival goldmine of his life and times.

Throughout the 1970s Warhol frequently socialized with celebrities such as Jackie Kennedy Onassis and Truman Capote, both of whom had been important early subjects in his art. He started to receive dozens—and soon hundreds—of commissions for painted portraits from wealthy socialites, musicians and film stars. Celebrity portraits developed into a significant aspect of his career and a main source of income. He was a regular partygoer at Studio 54, the famous New York disco, along with celebrities such as fashion designer Halston, entertainer Liza Minnelli, and Bianca Jagger.

In 1984, Warhol collaborated with the young artists Jean-Michel Basquiat, Francesco Clemente, and Keith Haring. Warhol returned to painting with a brush for these artworks, briefly abandoning the silkscreen method he had used exclusively since 1962.

In the mid-1980s his television shows, Andy Warhol’s T.V. and Andy Warhol’s Fifteen Minutes were broadcast on New York cable television and nationally on MTV. He created work for Saturday Night Live, appeared in an episode of The Love Boat and produced music videos for rock bands such as The Cars. Warhol also signed with a few modeling agencies, appearing in fashion shows and numerous print and television ads.

Warhol was a prolific artist, producing numerous works through the 1970s and 1980s. His paintings, prints, photographs, and drawings from this period include: Mao, Ladies and Gentlemen, Skulls, Hammer and Sickles, Shadows, Guns, Knives, Crosses, Dollar Signs, Zeitgeist, and Camouflage. Warhol’s final two exhibitions were his series of Last Supper paintings, shown in Milan and his Sewn Photos (multiple prints of identical photos sewn together in a grid), exhibited in New York. Both shows opened in January 1987, one month before his death. 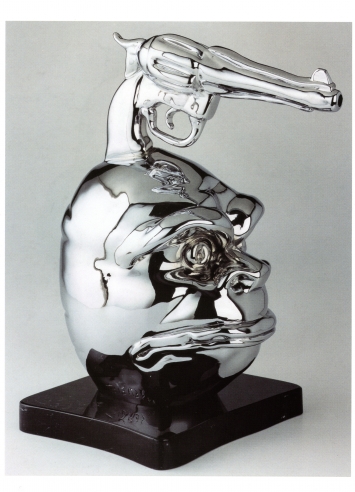