‘We are all in the gutter, but some of us are looking at the stars.’

Each block of text is a sophisticated system of hieroglyphs, calligraphy and illuminated lettering.

With influences extracted from Arabic, Egyptian, Hebrew, Anglo-Saxon (or Old English) and

poetry; one that reflects the harsh realities of urban life, while granting itself access to

overlaid with rhythms from the urban jungle. These are sourced from his youth in Los Angeles,

bloodlines. These subcultures factor into the physical product of his labors, often accompanied

in the studio or on the street by a stream of sounds (whether it be music, ambient city noises or

anonymous passers-by). It is this multimedia experience that is laid onto the painted surface for

and complex, their foundational beliefs and symbols will take on new meanings. RETNA’s work

reflects these changes with every successive project. Whether staging an international traveling

alongside artists such as Keith Haring, Os Gêmeos, and Barry McGee on the famed East

however, is his dedication to an artistic practice rather than abandoning principle for principal.

street graffiti: the elegant swoops of ink-like letters and the poetic statements themselves

seemingly adhere to messages of intellectual contemplation and restraint. RETNA’s use of a

feather-tipped paintbrush owes to the airy movement of the characters. According to the artist,

this conscious choice of material is also a nod to the Spirit of the Falcon, an ancient Egyptian

totemic emblem signifying success and victory. A steady stream of references to victory and

transcendence of worldly hardships reside in his work, perhaps in and of itself a collective plea

from the depths of the streets to the canopy of fame and fortune. At the risk of delving too

urban environments, RETNA’s messages are masked in ciphers: words and meanings that are

never immediately revealed nor capable of being accurately translated. Even those closest to

him have only inklings of his gleanings in concrete form, as he continues to develop a dedicated

Apart from the letters being physically graceful and the content of his messages profound,

RETNA’s practice has grown beyond letters and words. His letters have been shaped into three-

dimensional sculptures (similar to Robert Indiana’s stacked messages), they have graced the

bodies of fashion models as body paint, and have served as textbook-like illuminations in

conjunction with figurative images from longtime collaborator El Mac. Whether he will pursue

strictly abstract permutations of his signature style remains to be seen. For the moment, even if

the content of RETNA’s language evades the typical viewer, the instant connection to the

mystique of Antiquity is potent. The messages, themselves, are not meant to be overly cryptic.

What RETNA asks of his audience is a heightened sense of aesthetic perception. Beyond the

object on its own, RETNA’s work is meant (like any well-executed painting) to evoke immersive

contemplation. Narratives are present, but they are not immediately visible. The artist’s

sensibilities and personal tastes are not immediately discernible in the work, which owes to a

professionalism in distancing an artistic life from a private persona.

art. Sensations of conflict, loss and the shadow of law enforcement are all cited as RETNA's

motivations in creating work both on the streets and in the studio. All the while, his focus is set

on contributing to the full spectrum (from academic to commercial) of contemporary art; a field

that, in and of itself, requires swift adaptation to ensure survival and longevity. RETNA notes

that his most common media formats are based in painting: acrylic, enamel, aerosols and oils.

With the work anchored in typographic forms, the tools and methodologies of the painter are

key. The biography in RETNA’s work lies in the persistence of the medium transposed to an

arena outside of the closed gallery space. While the ‘white cube’ atmosphere is certainly an

appropriate venue for the artist’s oeuvre, it is neither prioritized nor preferred.

Like other influential street artists such as Banksy, Shepard Fairey, Basquiat and Keith Haring,

RETNA maintains a devotion to an aesthetic reaching further than the gallery or institution. The

source, the spring for RETNA, is the city. He possesses a keen understanding of the

contemporary art world, while maintaining a measured independence as a practicing, and

Shana Beth Mason is a contemporary art critic based in Brooklyn. She received her M.A. in the

London. She contributes to publications and media outlets including ArtVoices Los Angeles, The

Radio. She has lectured at The University of Arizona's College of Fine Art Professionalism & Art

the Visual Arts, and Christie's Education London: From Passion to Profession Alumni Lecture 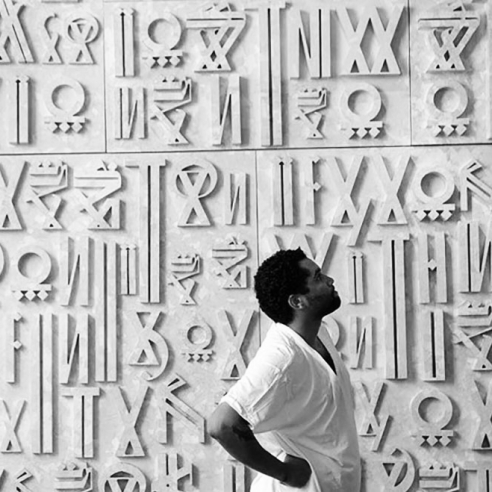 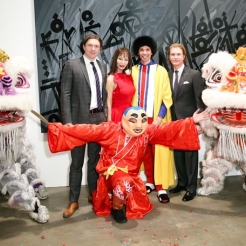 The Hoerle-Guggenheim Gallery marked its opening in style with a beautifully curated Chinese New Year celebration. The festivities included a traditional dragon dance set against the backdrop of expansive RETNA canvases, and a dinner with fortune cookies. 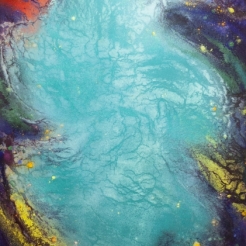 Philippe Hoerle-Guggenheim, the director of Chelsea gallery Hoerle-Guggenheim, has acquired an impressive array of important modern and contemporary artists for a gallery as young as his—it opened its doors on West 23rd Street for the very first time early this Fall. The gallery's most recent acquisitions include seminal works by artists RETNA. Also of note in the collection are the rich color-laden canvases of Natvar Bhavsar as well as a few choice works by Warhol, John Lennon, and Dalí.