Where In The World

Completed in a limited edition of three prints (49.25”/125cm square, chromogenic print on Fujiflex Crystal high-gloss digital printing medium, mounted on anodized aluminum under gallery “float” plexiglass), this seminal work from the pixelated fabric series evolved into this vibrant, compelling, and popular color-field composition from three Instagram posts starting on November 7th, 2016, which can be found on the artist’s Instagram feed @janlarsenart

The first in Larsen’s popular eight-work pixelated fabric high-gloss color-field series, this work calls for the pursuit of social and political progress through central paths of moderation, following what he viewed as the unwise, deleterious, and controversial result of the 2016 US election, resulting in his opinion from a period of pronounced social and political polarization that was facilitated, ironically, by social media.

You can get a feel for some of the ideas behind the work in the artist’s voice here: http://www.janlarsenart.com/pixelatedfabric.mov

A complete one-page statement on the series is available from the gallery.

With RISE, the artist refers to the many meanings of that word:

• ‘rising’ to a challenge

• ‘rising’ above any evil or intolerance

• ‘rising’ as individuals, to speak and to be heard in one's authentic voice

• ‘rising’ to be counted, as in politically, especially in this current political climate

• ‘rising’ to competence and mastery in one’s work

• ‘rising’ on a tide of love and good energy, and finally,

• like the everyday phrase for waking up: ‘rise and shine’

“RISE is both an observation and a call to action, celebrating each person’s ability to ‘rise’ in her or his own unique way –  above challenges, above intolerance, giving voice, action, and credence to the better parts of her or his own nature.”

“As John Lennon wrote, ‘we all shine on,’ and as Warhol observed, we are all stars, and so indeed, may we all ‘rise and shine.’”

With large and medium-scale media-referential works on gaming suede, Larsen offers meditations on the contemporary experience of social progress as expressed by and witnessed in popular culture circa 1962 to circa 1985.

His large-scale totemic colorfields on gaming suede, his medium-and large-scale, high-lustre, highly-reflective chromogenic prints under plexiglass, and his hand-held scale bronzes each draw on and refer to his own personal experiences, philosophy, and work in fine art.

RISE echoes three streams of work begun in Larsen’s debut show with HG in 2015, called Market Makers, continued in his series called fashion forward (2016) and pixelated fabric (2017), and to be continued in his next show, called FIT, launching in the Spring of 2018 – namely, media-referential works (this time on gaming suede, the same material that billiard tables are upholstered with), abstract colorfield works (some on gaming suede and some on high-resolution, high-lustre, highly-reflective printing medium, and mounted under gallery plexiglass), and cast-bronze sculptures. 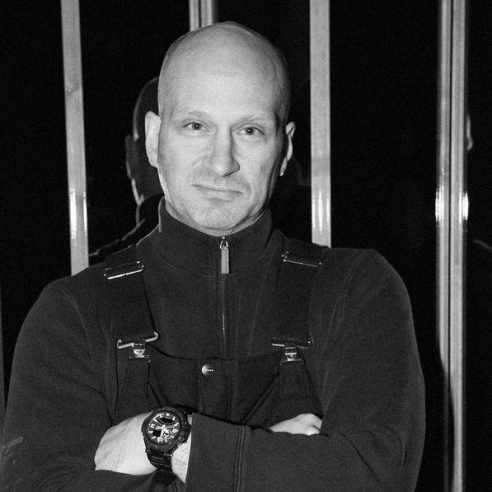